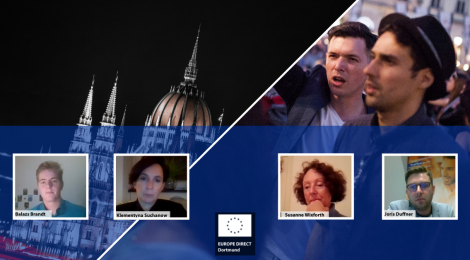 Poland and Hungary have been making headlines recently by being in a state of conflict with the European Union. On 14th of October, we discussed the developments in both countries with our guests Balázs Brandt, President of JEF (Young European Federalists) Hungary, Klementyna Suchanow, Author and Activist All-Poland Women´s Strike and Susanne Wixforth, Head of Unit in the International and European Union Policy Department of German Union Confederation (DGB). Joris Duffner, manager of Europe Direct Dortmund, moderated the discussion.

What is the news on the political situation in Hungary and Poland?

The first topic addressed is the recent development in Poland, where the constitutional court ruled, parts of EU law were not compatible with the polish constitution. Klementyna Suchanow explains, 80% of the polish population considered themselves pro-European. Many of these people are currently protesting. Although, she differentiates between the protests of last year, which were mainly concerned about women’s rights, and the recent ones, which had a very clear purpose: to strike back against the threat of a possible Polexit.

When asked about similarities in Hungary, Balázs Brandt states, young Hungarians were mostly supporting the EU membership of their country, but the upcoming primaries captured all the public attention in Hungary. He also attests the government propaganda a lot of success. This might be a consequence of the state media, which does not cover the primaries in a balanced way. Objecting to Mark Rutte’s statement, that the EU might be better off without Hungary, Brandt stresses the importance of a strong Hungarian support for the European Union.

Concerning the situations of the Polish and Hungarian trade unions, Susanne Wixforth explains the support for the European Union is great within the trade unions, but because of their low membership, they do not have much influence. Many people still see trade unions as being part of the old communist regime and therefore do not want to engage in them. A crucial problem is the competition between the member states. Many eastern European countries see their low wages as their competitiveness, which is detrimental to their workers. Wixforth stresses the importance of the Conference of the future of Europe because “Europe in itself is in a very difficult state”.

Joris Duffner leads the conversation to voting differences. Suchanow confirms their existence in Poland and explains that because of the historical separation of Poland, the western parts of the country are mainly liberal, whereas the eastern parts tend to lean to the conservative side. Differences are also visible in other aspects of the society. Young polish girls seem to have more progressive political ideas, than their male counterparts. However, in recent years many polish boys’ political orientation has shifted to the left.

How are the societies reacting?

The conversation comes to our guests’ personal stories. Klementyna Suchanow describes her disbelief of the rules against abortion that were put in place in 2016. She underlines: This is our 68’ protest right now”.

The question of a possible influence of the protests of the next polish election is raised. It will take place in 2023, but as the government does not have a majority and therefore cannot easily govern the country, the elections might also come up earlier. Suchanow mentions the concerns that the next elections might not be legal or fair.

Being asked for the circumstances in Hungary, Balázs Brandt criticizes the political situation, which he describes as “polarized”. The JEF do not receive any funding or support by the government, as they, alongside all other organisations that are pro-European, are classified as opposition. Therefore, organisations from the other political side will not engage with them. Brandt states this “weakens our position to create a balanced dialogue”. Susanne Wixforth agrees with the notion that the social dialogue has stopped totally. Then she criticizes the conditionality of the recovery plans of the European Union. Funds from the EU goes to regional projects, and the mayors are often members of the opposition party. When the national government violates the European rule of law, it has a detrimental effect for the regions, who stop receiving money, although they are not responsible for the situation. Nevertheless, she admits that it is difficult for the EU to decide, how to deal with the countries that breach EU law.

The question of motives within the governments comes up. Suchanow stresses that with an abortion acceptance quote of 70% within the polish population, the government cannot win elections like this. She brings the topic of money into the conversation. The polish government might fear to lose funds, which Suchanow calls a powerful motivation. Brandt mentions the Orban government from 1998 to 2002 was a very ambitious government with a “heavy background from the soviet era”. He assigns the current Hungarian government mainly financial motives, as many EU funds were misused. The demeanour towards Brussels is called rhetoric. The image of the government protecting the Hungarian, conservative, family centred identity from migrants is simply effective within the Hungarian population. Another effective strategy is the controlling of the media, which helps the government spreading their narrative.

In Poland, the medial situation is different, as there are fact-checking newspapers, but Suchanow criticises that many investigations do not go deep enough. She refers to one concerning incident, where a journalist was invaded at home and had his computer taken away. Comparing the polish situation to the one in Russia, Suchanow suspects that an oligarchic state is being built up in Poland.

What can the EU do?

Concerning the question of what the EU can do in order to counter antidemocratic developments in its member states, Wixforth mentions that the countries in question are both young members with a short democratic history. The EU should support them in their way of integration, as it would be problematic to exclude them. She says Article 7, which could ban a member state from using his vote, relays on, “questionable democratic justification” and the EU needs to start to reform, as it still contains an incomplete freedom of workers and is no social union. She criticises that there is competition but no protection from it in the EU.

After debating all these problems within Hungary and Poland, the conversation comes to the question of whether the EU focuses too much on these issues and what could be done to support pro-European movements in member states with anti-European governments. It is clear that the situation needs to be evaluated on why these problems come up and why many people accept their governments breaking EU law. However, it is difficult to determine how much the EU should intervene in its member states. A safe way is to invest in the youth, as they will run the country in the future. Nevertheless, “change has to come from inside”, as Brandt puts it.

As a reaction to the situation, Suchanow demands the EU needs to take actions. She clarifies the majority of the people are supporting the EU and want to stay. Therefore kicking the countries in question out of the EU would only be beneficial to the Russian government. She is convinced the Polish government will not change due to the protests. Brandt attests Hungary a similar situation.

On the question, how Germany can help the pro-European movements in Hungary and Poland, Brandt endorses the media coverage of protests and demonstrations against the breaching of EU law.

In the end, the guests face the toughest question of the evening: Is a Hungarian exit from the European Union likely? Brandt does not think so; the Hungarian government relies too much on EU funds.