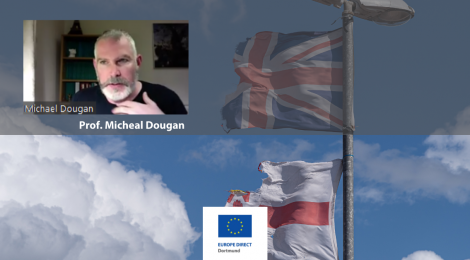 Brexit and the conflicts that go hand in hand with it have kept us busy for several years now. One of the most difficult issues is the Northern Irish border and how to deal with it in a post-Brexit world. On 16th February, we talked about the Irish border issue with Professor Michael Dougan, Professor of European Law and Jean Monnet Chair in EU Law at Liverpool University. The talk was co-organized by the Europe Direct Centres Dortmund and Aachen, the Young European Federalists (JEF) in the Ruhr area and the Dortmund Anglo-German Society in the Auslandsgesellschaft.de. Geoff Tranter, Chair of the Anglo-German Society, moderated the talk and the subsequent Question and Answer session.

The Northern Ireland conflict and the Good Friday Agreement

The evening began with an overview on the conflict by Professor Dougan. He started on a very personal note with stories from his childhood in Belfast, sharing some photographs from the time of “The Troubles” (as they are known across Ireland). Professor Dougan told his audience, how he as a child had to hide in a wardrobe during the riots.

The whole conflict between the Protestants and the Catholics was significantly downgraded with the Good Friday Agreement in 1998, which was basically a tolerable solution for both sides. The Protestants, also known as Unionists, achieved their aim of remaining in the UK based on the principle of majority consent.  And the Catholics, who were Nationalists and wanted to rejoin the Republic of Ireland, could continue hoping for unification in the future – but in the meantime, could enjoy the benefits of an open border with the Republic.

The Irish border – A never-ending story

Northern Ireland is one of the parts of the UK most affected by Brexit. Of those impacts, the most significant challenges relate to how Brexit might impact upon the current open border between Northern Ireland and the Repubilc – and therefore also upon the Good Friday Agreement, given the importance of the open border for maintaining cross-community support for the peace process, as well as its economic and social importance for across the island of Ireland, to say nothing of the logistical challenges of trying to monitor and enforce such a complex international frontier.

Professor Dougan pointed out that there are effectively two kinds of border controls: The first refers to the movement of people, which is quite easy to deal with because this has little to do with EU law in general, Ireland and the UK never having been fully part of the Schengen Agreement. They have their own agreement, so it is not necessary to show a passport – a situation which remains unchanged despite Brexit. The second type of border control concerns goods and trade, which is more difficult to manage because this is a matter for the EU and the UK, not just the two countries. So, as Professor Dougan explained, this border involves the huge problems of the Customs Union and the Single Market.

The UK’s promises – A vicious circle

After his presentation, numerous questions were raised by the audience. Would a new UK government help to solve the issue? Professor Dougan explained, in quite a disenchanted way,  that in his opinion anything would be better than the current UK Government, and that the best thing that could happen at the moment would be the implementation of the Northern Ireland Protocol. Looking at Northern Ireland, the current UK Government uses the Unionists as a tool, so even if the protocol is applied there is tension.

Another question referred to EU-UK relations: What can the EU do to make its voice heard? As Professor Dougan explained, the problem is that the EU’s power is very limited,. To put it frankly: The EU tends to respect the rules – the UK does not. Therefore, there are two options for the EU: Firstly, the European Court of Justice could condemn the United Kingdom and impose a fine, which, however, the UK Government could simply refuse to pay. The second option would be to re-introduce tariffs on goods and apply economic and diplomatic pressure. On the other hand, the British Government thrives on its disputes with the EU. And, moreover, neither of these options would help Northern Ireland.

Is there an ideal solution for Northern Ireland? Not in Professor Dougan’s opinion. All we can do is to seek damage limitation. A majority of people in Northern Ireland wanted to remain part of the EU. The best way out of the current mess would have been to have never left the EU in the first place. The border has become a toxic political issue. In addition, all the benefits achieved by the Good Friday Agreement in finding a solution to the conflict in Northern Ireland are at risk. Even if Northern Ireland and the Republic of Ireland were to be reunified, a significant part of the Unionist population would never accept such an outcome. So there is no optimal solution – Brexit means that Northern Ireland has an internal problem to deal with. Professor Dougan ended his quite personal and very informative talk with the words: “It’s all about managing the damage. It’s a depressive message. But we have to make compromises, they aren’t easy”.